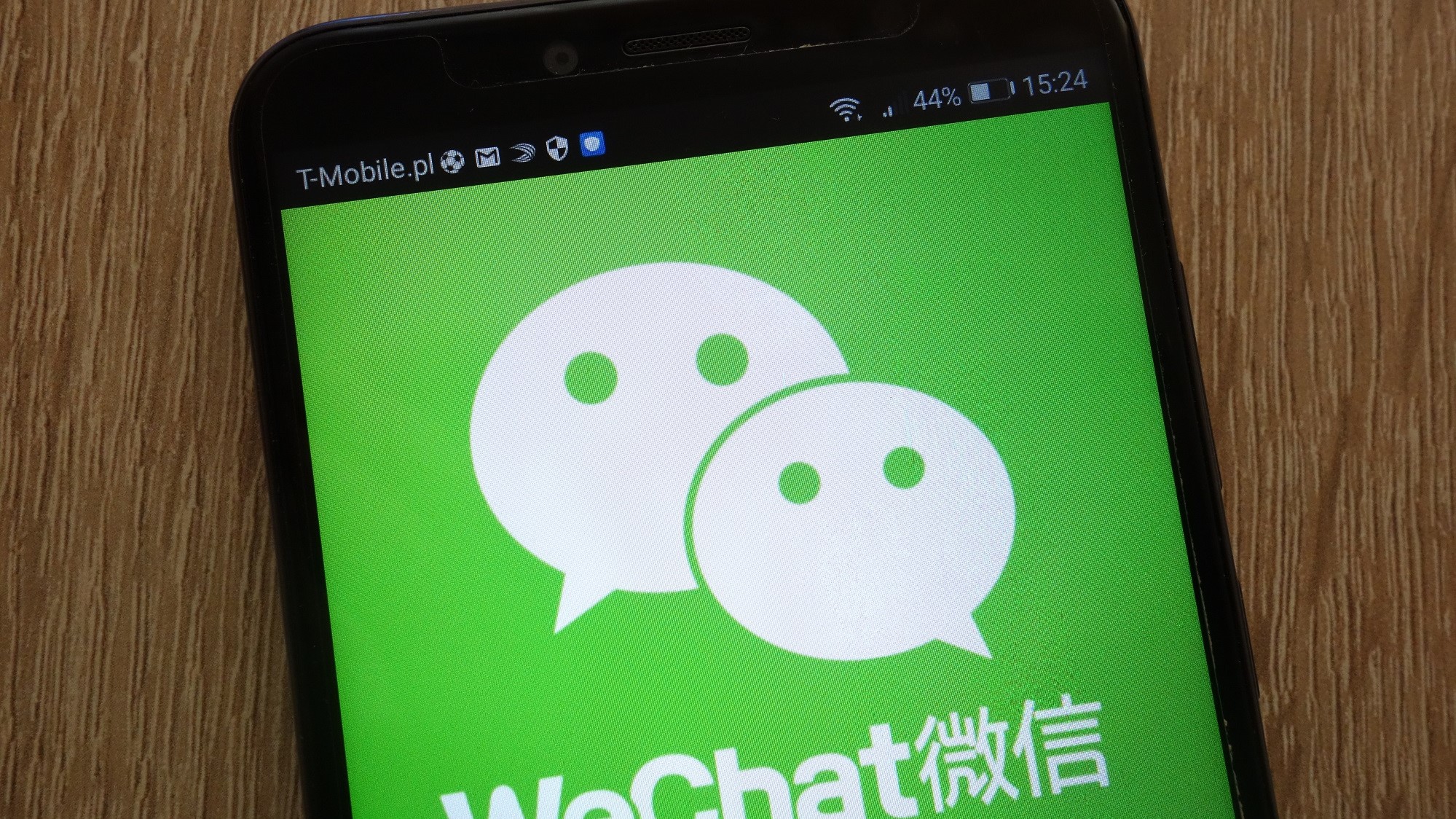 Mini-programs are ‘sub-applications’ for the popular Chinese social media App WeChat. Tencent launched them in early 2017 and they have already become something of a Chinese mobile sensation. Mini-programs offer advanced features to WeChat users so they can turn their individual accounts into platforms for e-commerce, games, local life services and so on. We look at mini-programs, their core functions, strengths and limitations and the outlook for the future.

The background and advantages of mini-programs

Mobile Apps take up a lot of space on any device. And device users may not want to download a brand or company App because it inhibits, for example, the number of photos they can store on the device. What’s more, irregular or occasional customers will be even less likely to download a storage hungry App from a brand or supplier – why have a rarely used App sitting on the device that impairs the performance of the rest of the device? So ‘mini-Apps’ – or programs – take up less space, are more convenient and also often faster than native Apps.

Basically, mini-programs are like Apps within WeChat, but are Apps that don’t require downloading since they are already available and enabled within ‘the walled garden’ of WeChat. With the addition of mini-programs, WeChat aimed to create its own ecosystem of Apps that would provide an open platform for outstanding service providers. Mini-programs are good news for any business owner who wants to reach Chinese consumers pretty much instantly.

At the 2020 WeChat Open Class Pro event in Guangzhou on 9 January, 2020, WeChat mini programs recorded over 300 million daily active users in 2019, with usage up 45% from the year before. This growth is continuing rapidly.

By the end of August 2019, the number of mini-programs available through WeChat reached 2.36 million, with a user base of more than 840 million, beating the early expectations of user growth shown below: 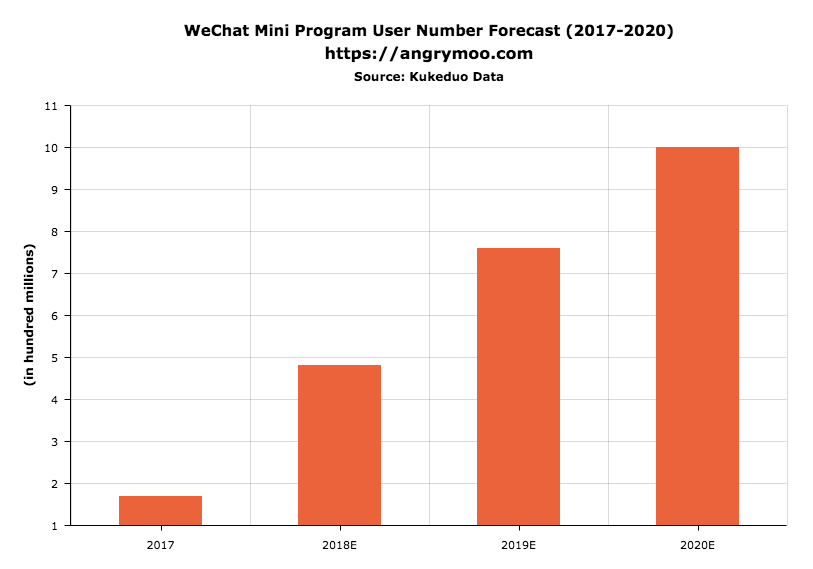 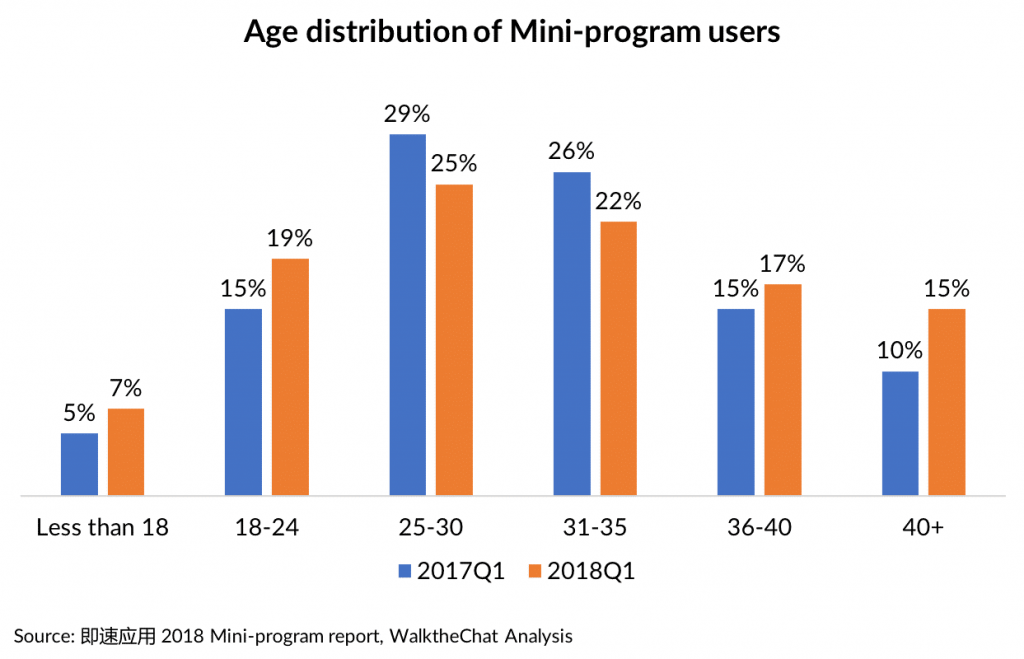 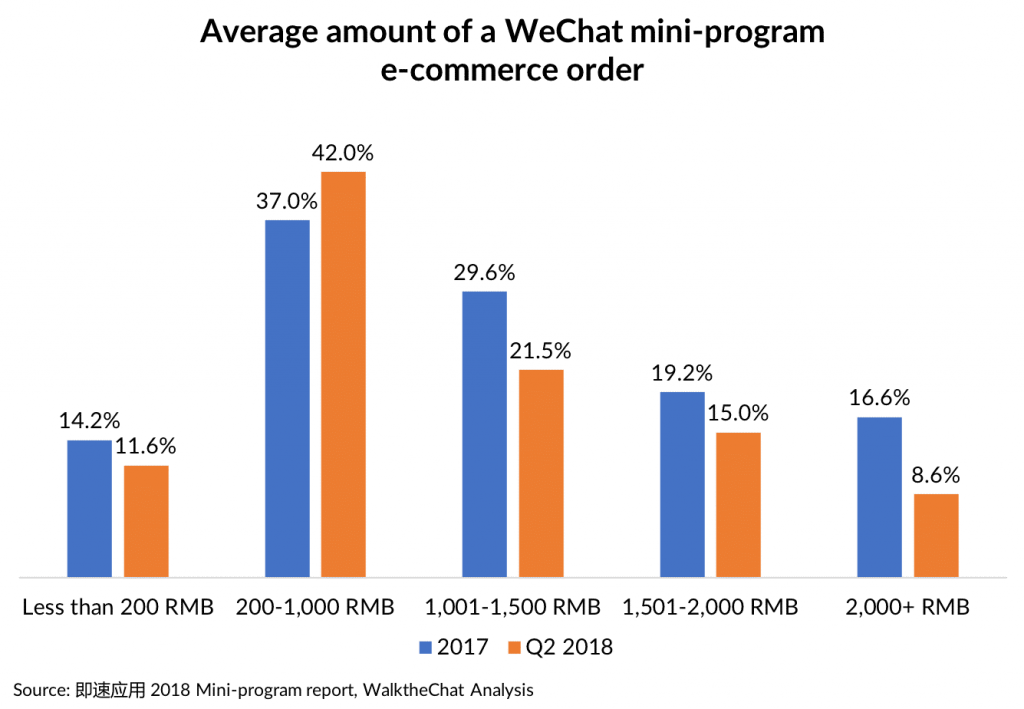 Recently Tencent announced that its users spent 800 billion yuan (US$115 billion) through its various mini-programs in 2019, a 160% increase from the previous year. Examples of key sectors using mini-programs include retail, for both offline & online shopping, e-commerce services, everyday services such as travel services for booking trains, flights, restaurants and hotels as well as financial services. Government services are also available such as security, medical services, tax and postal services. In 2020, Tencent will focus even more on adding merchants and services to mini-programs, giving them new capabilities like live streaming.

Mini-programs are attractive to small and medium sized businesses as they can be cheaper and easier to build than native Apps. However, major brands also have a huge presence trading on mini-programs, such as local services giant Meituan Dianping, which has over 350 million annual users, and utilises mini-programs on WeChat. Tesla, for example, created a mini-program to help owners find charging stations, schedule a test-drive and share their experiences about driving a Tesla car: 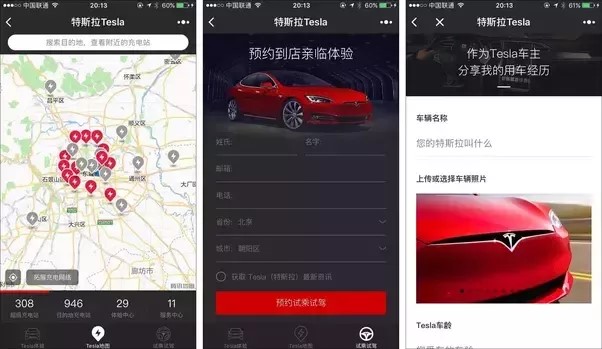 Whilst JD.com, the second largest B2C e-commerce platform in China to Alibaba with over 300 million annual users, has also developed an e-commerce mini-program: 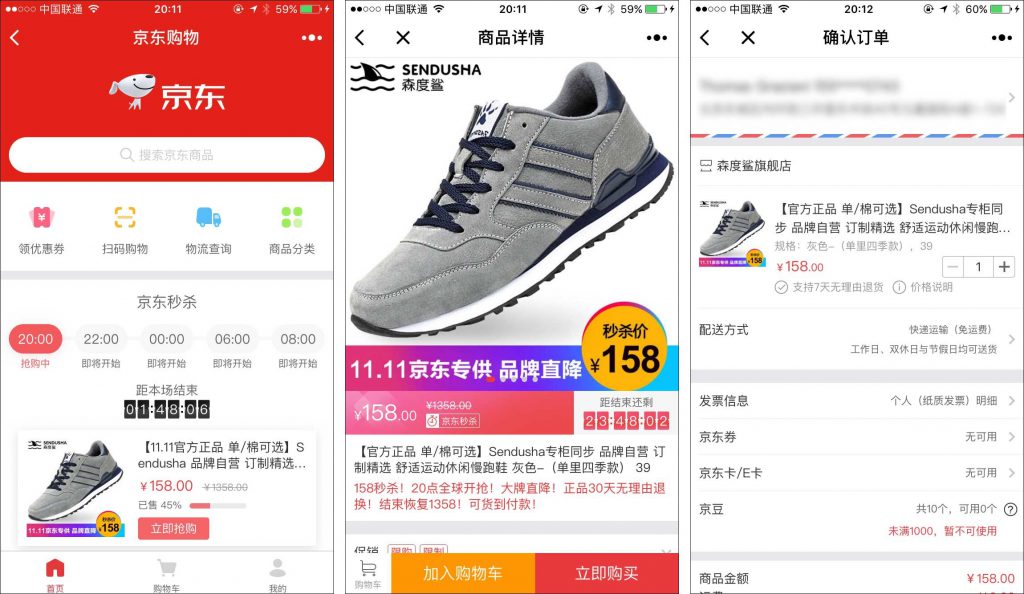 Many well-known luxury brands also have become early adopters of this platform, such as Longchamp, Dior and Michael Kors. These brands have all taken a creative approach to the use of mini-programs, offering value-added services to their followers which ultimately leads to increased following and revenues. Dior, for example, uses mini-programs to build emotional connections with its audiences. It created a mini-program for Chinese Valentine’s Day, focusing on gift sharing. Each gift card had a love message on the cover, with the gift options of lipstick and perfume. Once purchased, the customer sent the card directly to their loved ones on WeChat and the gift could be picked up from a Dior’s retail store nearby (Source: Jing Daily). This example also shows how using mini-programs to work with, rather than independently of other channels to market, can offer even greater benefits to brands.

Because these e-commerce experiences are all built completely within WeChat, they are usually very fast in terms of loading speed as well as smooth in terms of UX and integration with other WeChat features and navigation. Users don’t have to learn a new navigation like they would every time they visit a native App elsewhere on the phone, or have to spend any time switching on the phone to a native App – mini-programs are easy to use! Furthermore, WeChat mini-programs also can be useful for offline use by utilising QBE codes. For instance, for paying for petrol at a service station or unlocking a shared bike.

A survey co-authored by Chinese research agency Kueclub and Tecent Research & Development indicates that nearly 70% of the 8,000 respondents are optimistic about the future of mini-programs and over 40% think mini-programs can replace stand-alone Apps someday. In the future, Wechat mini-programs that focus on functionality and entertainment will become more popular too (Source: Jing Daily). 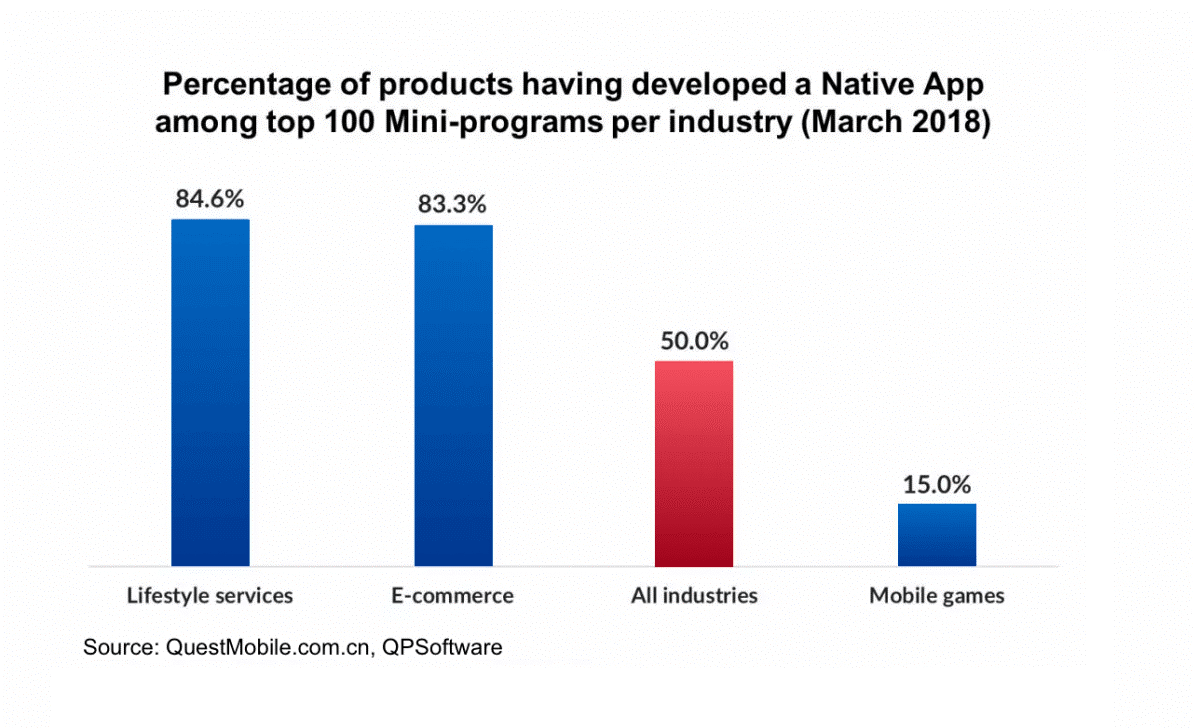 Based on the above data, users of WeChat mini-programs are more likely to spend smaller amounts on WeChat Mini Programs. For purchases big amounts, users tend to use the Mobile App instead. Therefore, based on this information, it may be worthwhile for companies to focus on targeting mini-program users in third-tier cities and lure them onto their mini-programs with attractive and affordable products.

The way forward for WeChat mini-programs

Mini-programs are clearly on an upward trajectory and the outlook for them is rosy. They’ve been an important driver for WeChat’s growth in both user base and advertising revenues, from both Chinese and foreign brands.

Other tech giants have also recently copied their example and climbed on the mini-programs bandwagon, with Alibaba and Baidu both rolling out their own versions of mini-programs on their major Apps. In September of 2019, Tencent said it would enable sellers to sell products through live streaming within WeChat. That puts it in direct competition with the likes of Alibaba’s Taobao, which has built its own ecommerce live streaming kingdom (Source: Abacusnews). Now, Tencent, the originator of the mini-program concept, has developed the strongest and most vibrant community and will fight hard to keep it that way.

How Melchers can support foreign businesses in China

To successfully participate in the WeChat mini-program mobile sensation, especially for small and medium-size companies, it is important to have the right partner in China such as Melchers.

Melchers knows that each company requires a customized solution for its approach to the Chinese market, both online and offline. We develop and implement digital strategies for a successful digital market entry of a brand partner to China. Services include consultancy on digital marketing in China, designing, building and optimizing web and mobile presences in China to drive customer acquisition (SEO, PPC, social media/KOL engagement), content creation and CRM for partners’ social media accounts in China (WeChat, Weibo) as well as establishing a presence for brand partners in key e-commerce marketplaces in China (WeChat Shop, Tmall Global, JD.com, etc.).